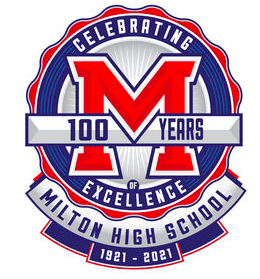 Since its founding in 1949, the band program at Milton High School has been an integral part of the school and community and has a decades-long history of excellence.

With an enrollment of over 200 musicians, all students are auditioned or placed into one of three concert band classes or a percussion ensemble that meet daily as part of a six-period standard academic schedule. Over 150 of these students also participate in an extracurricular Marching Band that has become a consistent finalist at Bands of America Regional events in addition to having received multiple class and grand championship awards at recent GMEA competitive marching band events. Recently the Marching Band has represented the Milton community at the 2014 and 2018 New York City Veterans Day Parade and the 2016 and 2021 Hollywood Christmas Parade in which they performed. The Milton Indoor Drumline has been a WGI regional or world championship finalist for the past nine years, and the MHS Jazz Ensemble received an invitation to perform in the prestigious Atlanta Jazz Festival in Piedmont Park after placing third in the 2014 Atlanta Youth Jazz Band Competition. After being founded in the fall of 2000, the Milton Wind Ensemble quickly gained a reputation of excellence. Previous invitational performances include the University of Southern Mississippi (2002, 2005), the Southeastern United States Band Clinic (2003), University of South Carolina (2003, 2007, 2015), the Bands of America National Concert Band Festival (2004), the MENC national conference (2006), Columbus State University (2010, 2022), the University of Georgia (2003, 2007, 2011, 2018), the University of Alabama (2012, 2019), the Georgia State University “Bands of Distinction” Clinic (2014), the Georgia Music Educators Association State Conference (2004, 2015, 2020), the Kennesaw State University Band Invitational (2016) and the Music for All Southeastern Concert Band Regional Festival (2016). The Milton Band was the recipient of the 2014 Georgia Music Educators Association "Exemplary Performance Award," in 2015 was named a "commended winner" in the Foundation for Music Education's Mark of Excellence Awards, and in 2016 was named a southern division "Blue-Ribbon Program of Excellence" by the National Band Association.

Located thirty miles north of Atlanta, the original Milton High School sat just a block from Main Street in historic downtown Alpharetta. Originally constructed in 1921 serving all of what was then Milton County, today’s Milton High School bears little resemblance to the original one room building. The school remained known as Milton County High School until the merger of Milton County and Fulton County in 1932. Much of the curriculum was then based around the area’s primary source of income, which was farming. The tremendous amount of growth in the area during the last decades of the twentieth century saw Milton High School transform into a world-class comprehensive high school, with the school earning distinctions as a Georgia High School of Excellence, a U.S. News and World Report Outstanding top High School in the Nation, and being awarded as a national “Blue Ribbon School” by the United States Department of Education. In 2005, Milton High School moved to its new campus in the newly incorporated city of Milton, just outside of its original home in Alpharetta. The school currently has an enrollment of around 2,400 students with highly successful academic, fine arts and athletic programs.

About the Fulton County School System

Founded in 1871, the Fulton County School System is one of the oldest and is currently the fourth largest school district in Georgia. Approximately 90,000 students attend classes in 59 elementary schools, 19 middle schools, 19 high schools, and 10 Charter Schools which employ more than 6,800 teachers, and over 4,000 other support staff